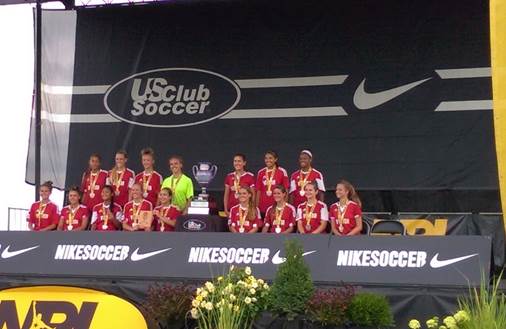 On Monday, 7/17, at 11am the Phoenix 99 squared off against the also undefeated Indiana Fire Juniors for the U18/19 NPL National Championship. The Indiana Fire Juniors is the local ECNL club and their team was entered, as a wildcard, to complete the playing field and advanced to the final after beating FC Stars 5-1 in the semi-finals. So, Phoenix ‘99 knew that it would be a hard nut to crack. From the starting whistle, it was immediately clear that the Indiana team was more athletic with more technical ability than any other team the Phoenix had faced in the tournament. They were also patient in possession, making the ball do the work and finding open players with a switch of play when needed. In the attacking third of the field, they did not hesitate to be dangerous, taking any space offered and taking on players 1v1 time and time again. They also did a nice job of finding players who were already running before receiving the ball. They were very committed to attacking and put the Phoenix under\ tremendous pressure in the opening moments of the game. By pushing numbers up, it also offered the Phoenix opportunities to counter attack and within the first 15 minutes of the game Phoenix 99 had 3 good scoring opportunities that were not converted - including hitting a post when the GK was already beaten. This was not a game to miss opportunities and the bill was served after 20 minutes when the Indiana # 10, with lots of space in the midfield, was allowed to advance towards goal and play the ball to the striker, in full run, between 2 defenders, who calmly slotted the ball in the goal for the 0-1 score. Ten minutes later it was 0-2 after a well struck corner kick was deflected into the net. In the last 15 minutes of the first half the game flowed back and forth without either side creating good scoring chances.

At halftime, the team discussed adjustments to better defend the flanks without leaving the middle of the field unguarded. With the adjustments, the Phoenix were better able to defend the Indiana attacks in the second half and the resulting play was more balanced than in the first half. In the 57th minute Rachel Jackson connected on a pass from Abby Fusca to volley home for the Phoenix. 1-2, game on! The goal unnerved the Indiana team a bit and the Phoenix got a couple of opportunities right away from easy turnovers. Unfortunately, the Phoenix were not able to convert and eventually the Indiana team recovered to create some good opportunities for themselves. With about 15 minutes left, the game was decided by a PK - called by the referee, after an Indiana player stumbled in the box. The kick was taken expertly, low and hard, 1-3. An extra attacker could not make up the difference for the Phoenix. In the end, the team lost to a team that was better on the day, even though the Phoenix created more 100% goal scoring opportunities. The failure to put away solid chances finally caught up with the team.